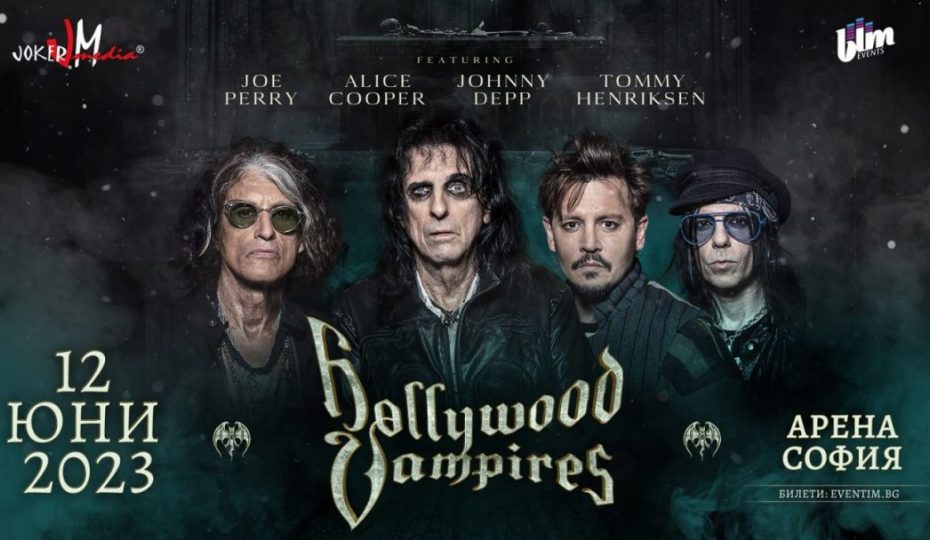 Supergroup Hollywood Vampires with their first show on Bulgarian rock scene!
Johnny Depp, Alice Cooper, Joe Perry & Tommy Henriksen are coming to Sofia on June 12.
On June 12, 2023, the supergroup Hollywood Vampires will perform for the first time in front of the Bulgarian audience with a rocking show. Johnny Depp, Alice Cooper, Joe Perry from Aerosmith and the guitarist Tommy Henriksen will blow up the venue “Arena Sofia” with some of the biggest rock hits of all time. The Sofia show is part of the European tour of the band, which is returning to the stage with a huge enthusiasm for real rock after a 3-year hiatus.
“Well it’s already been three years since the Vampires have toured. I can’t wait to get back with the guys, I really love being in that band. My band is great and wonderful, but playing with the Vampires is an entirely different situation.” – frontman Alice Cooper said.
Alice Cooper, Joe Perry and Johnny Depp formed the Hollywood Vampires to celebrate their ‘dead, drunk friends’ who died far too young. As tradition, making no secret of their love of classic British rock’n’roll, they pepper their blistering sets with songs from The Who, Led Zeppelin, David Bowie, Motörhead and more. The supergroup will also perform their own repertoire from the latest studio album ‘Rise’ for their fans, which includes the singles ‘Heroes’, ‘The Boogieman Surprise’ and ‘Who’s Laughing Now’.
The American supergroup Hollywood Vampires was formed in 2015 and named after Alice’s 1970s drinking club that included the likes of John Lennon (The Beatles), Keith Moon (The Who) and MickeyDolenz (The Monkees). Hollywood Vampires have released two studio albums featuring guest musicians such as Paul McCartney (The Beatles), Slash (Guns N’ Roses) and Brian Johnson (AC/DC).
Hollywood Vampires on the 12th of June 2023 at Arena Sofia. Doors open @ 18:00 o’clock. Tickets will be available from the 4th of November at Eventim.
VIP packages will be available from 2nd of November.